I plan to run multiple Contract Nodes with the same Lightweight Contracts and the same config.json for Contract Backup reasons. That is working fine.

But what if:
One Node is running an older Lightweigt Contract Version (same name)? Is this even possible since the Contract is uploaded to the Blockchain, it should always use the newest version right?

But what happens, if this node also runs an older config.json that references to the older Contract? (which is technically not possible because the names are the same right?)

But which contract is going to be triggered?
And may this also be exploited somehow by "third parties"?

Thanks for your help!

Your instinct is correct. The actual code for the contract is stored on the blockchain. Uploading a new version means to upload the new code and send a contract reference transaction linking that code with the same name.

All nodes running the contract runner for that account will switch to the new version at the same time: the block at which the contract reference transaction is included.

Thanks for answering. I guess I can manage to prevent different contract runner parameters.

But lets think one step further. Just purely hypothetical: my contract code would be on Github, public. Also the config.json (but without sensitive data like passphrases etc.). So anyone has access to it and could heavily modify it and upload it to the blockchain with the same reference name.

I would not even be aware of that but suddenly my Lightweight Contracts are behaving differently and even my node is executing the new version but has different parameters loaded.

For my understanding, is that not a security issue? Or am I missing something here? Anyone could break my contracts without me knowing?

Thanks for the clarification.

In your post, contract reference R1 and R2 are different names right? Is it possible to have:

Or is the contract reference link automatically generated?

There are two transactions involved on the deployment of a contract into the blockchain.

The code itself, the class or jar file, is a data cloud transaction. Nothing special about it.

Back to your example:

In your post, contract reference R1 and R2 are different names right? Is it possible to have:

R1 was upload by some account (let's say A), so it cannot be used by any other account. v4 and v5 of the contract would be different data cloud transactions. They could be from any account.

To wrap up, this is what a contract reference transaction contains: 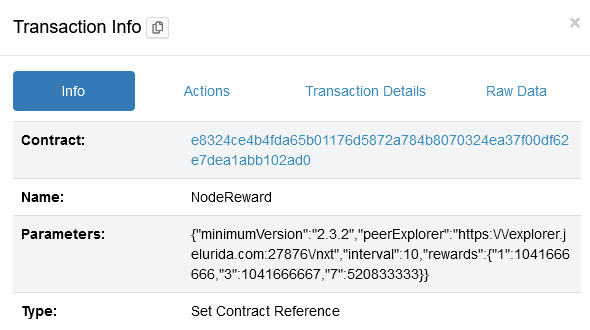 Here you can see the name, the parameters and the full hash (what's referred as contract) of the contract code. The account that sent this contract reference transactions is the one that will be running this contract.

Thanks a lot. Now I understand! I completely forgot that it is linked to the Account uploading the contract.

This means if I run multiple contract runner nodes, all have to load the config.json from the same Account. Makes sense now.